October 6 1966. “This day doesn’t mean anything to anybody except for me. This was my 21st birthday and the day that I was deployed. “

Some of the stories Richard told me, we aren’t going to share in this blog but they were extremely emotional. 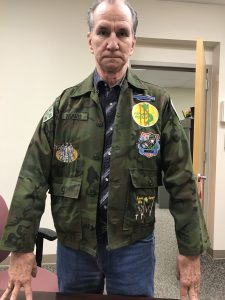 “I graduated from Woodruff High School in 1964. 7 days after I graduated from high school I went to work as a machine operator at Komatsu. What it came down to was that I was a worker there for 47 years total. I figured that I had it made because you had to be 21 years old before you could be in the military. I worked with Komatsu for about a year and a half. By November 22nd 1965, I was in the Military. They didn’t really know what to do with us “young ones” so they sent us to basic training for 10 months in Washington State.”

Richard went into service in 1965. He served in Vietnam from 1966-1967. He served for seven months before he got hit. Out of respect for Richard, I want to share his story but protecting his story at the same time.

Richard walked point for the company. Those who walk point are the ones who walk out in front of everyone during search and destroy missions. “It was safer than walking in the back and risk being shot by one of your own.” “I’m just a plain old soldier; it’s not all the good stuff that you see on TV.” Richard shared that his platoon wandered in the wilderness for days. “We were in a field for 2-3 months before we got back anywhere. About every 3-4 weeks we would stop someplace and they would re supply us. Mostly it was one of these things where you would wander out there to see what you could find and you’d find a village. Maybe there was one house in the village that was actually being used because of the war going on. Everyone else had left. The people there didn’t care that we were there or not. They just wanted to be left alone. A wife and a kid, maybe a pig and a little garden somewhere.”

“I carried a 40 pound pack through monsoon season. That pack held: an M16, 8 or so magazines, 1,000 rounds of loose ammunition, my food, my change of clothes, and a few other items.” Richard said that he and a guy who goes by the name of Gary O’Neil out of Indianapolis Indiana were the two that walked point. “I know what a bullet sounds like going by your ear. It’s one of those things where if you hear it, you’re still alive.” He said that he wandered for about five months and then it was decided that they would be located on a hill top to oversee the Cambodian border. “We were there about a week. I was getting antsy. I didn’t want to stay in one place for more than two days. We stopped on the opposite side of where the perimeter was, there were about five or six of us. About 10 o’clock at night they started shooting at us. They were so close I thought it was our weapons shooting… And then the world blew up.”

Richard and Gary had won a coin toss to go rest while others kept watch. “At about 3 o’clock in the morning they fired big mortars at us. One of them landed outside of the wire and the other landed behind us (our tent). “I got one little chunk in the shoulder. And my rifle blew up. I had gotten up to put on my boots and the next two (mortars) landed right next to our tent…. basically, I had the left calf of my leg look like hamburger. I had a skin graft behind my left knee. I was in the Vietnam Hospital for about a month; they shot me up with all kinds of stuff; I didn’t have no pain. They gave me one shot every four hours for 28 days. I didn’t have any pain. However, when they sewed me up, they sewed me up with stainless steel wire. I’ve got scare on my leg the same as if you’d have a heart bypass.  It looked like I had a spiral notebook going down my leg. I didn’t feel them put it in, but it sure hurt when they took it out. I lived with that leg for 41 years and then it was removed in 2008.”

“A lot of people talk about the VA (Veteran’s Association) not treating them right, but they’ve treated me well. In fact, they just bought me a new leg. It has a hydraulic foot. It actually bends. It works like a regular foot does. I just got this a few weeks ago.” After returning back to the States, Richard continued to work in the machine shop driving semis and running the fork lift. Someone once asked Richard, “well why do you do all this stuff (work wise after returning from Vietnam)? He responded with, “I don’t have to prove it to you, but I have to prove it to myself that I can do this.”

The first day of 2012 was Richard’s first day of retirement. I wanted to know what Richard does now that he is in retirement. What do you do now? “I ask people what their favorite color is. There’s probably hundreds of them out there.” Richard spends his time making afghans for those that he knows. He’ll ask you what your favorite color is and make you this sweet blanket with your name woven into it. 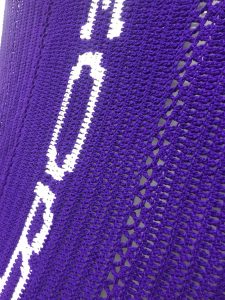 I’m sure I wasn’t the only one that would be curious about how Richard stays motivated. In no way was returning to life easy for him. Richard went through struggles but he made that comeback. He was married in 1971 and the day that he returned to work was the day that he got his life back on track.

Not only do we know Richard from just being a member here at the RiverPlex, but he also participates in PowerPhase and the mindfulness class that OSF offers. “I was able to go to Glacier National Park a few years ago and ride horses, go rafting, and go on long walks. I figured the only reason I was able to do this was because of those classes. “I know I have to do it (continue to stay motivated). I have to prove to myself that I can do it. Its kinda like quitting smoking, you can tell somebody that they need to quit but you’ve got to believe it yourself. There’s nothing you can tell someone that would make them motivated if they aren’t motivated to begin with. I could tell others how I did go to Glacier National Park and was able to do it, but if they don’t want to do it they don’t want to do it. You don’t have to use a lot of weight or walk for hours, you just have to keep doing it.” 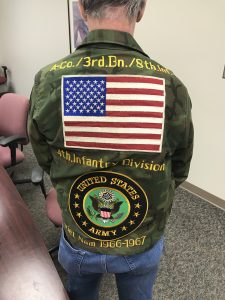 Richard is a true hero. He remembers every date down to the day of his life. We are forever grateful for his service and his continuing motivational outlook on life. If ever you see Richard in the hallways, just know that he doesn’t want your pity or for you to feel sorry for him. He’s living a great life that he worked for!