Here’s a story of two of our own and how they met in the military. Melissa is a group exercise instructor for us at the RiverPlex and her husband, Steve, is a prior GRIT instructor as well.

Melissa joined the 182nd Air National Guard in February of 1998, three days after her 18th birthday. “I actually graduated a semester early from high school because I was told that I could get into an earlier slotted basic training course that year rather than possibly having to wait until the year end to get a slot.”  While she missed her senior year prom and walking across the stage to receive her diploma, she felt that volunteering to serve was more important. “I left to go to Air Force Basic Training in Texas in the beginning of May.” After Melissa completed boot camp, she then went to Ft. Meade MD to Defense Information School and was trained as a journalist. Upon returning home, she served in the Public Affairs Office. After the attacks on 9/11 Melissa cross trained to Security Forces where I served the remainder of her enlistment. 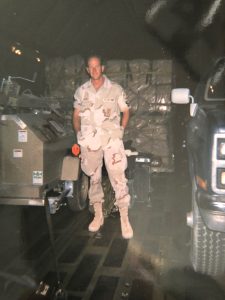 In July of 1992, two months shy of graduating high school Steve left for Basic Training in The US Army.  For eight years as an Airborne Radio Operator Steve had been stationed in North Carolina, Alaska – where moose hang out in your backyard, and overseas deployments to Haiti (Operation Restore Democracy) and Namibia, Africa, he then transferred into the Air National Guard.   Shortly after joining the Air Guard, he retrained to Security (Military) Police.  “September 11, 2001 happened and I deployed stateside for Operation Noble Eagle to both Valdez, AK and Washington D.C.” Steve moved back to Illinois from Alaska was deployed overseas for both Operations Enduring Freedom and Iraqi Freedom.  “As a full-time member of the Air National Guard here in Peoria, I retired after 22 years of service in 2014.” 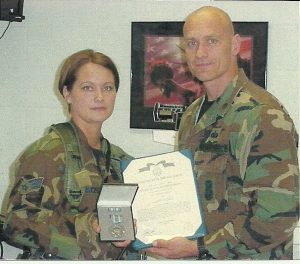 There’s a funny story about how Melissa and Steve’s relationship came to be….

“I first met Steve while doing an annual training event for security forces. During the training he took the liberty to correct me about my uniform lacking some required items. While he was correct, I determined then that I did not care for him and would not ever want to actually have to work with him.” Steve was then deployed after that training to Uzbekistan. After several months of Steve’s deployment Melissa had gotten news that Steve was returning to her shift for work. “I was furious because I had made it very clear to my supervisors that I did not want to work with him again. I tried to make them take me off of orders or move me to a different shift.” Upon Steve’s return, they had both attended a co-workers wife’s funeral. “He (Steve) approached me at the funeral and said hello… I turned around and walked away.”

Melissa was able to avoid him on her shift for a couple of nights. Then, they inevitably got posted together for a twelve hour midnight shift from 1900-0700. “At the end of that shift he invited me over for dinner the next evening and we’ve been together for the past 16 years now. I always tell him he must have worn me down over those twelve hours.” 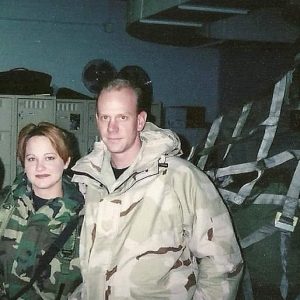