In more recent years yoga and mindfulness have gained popularity in adults due to the ever rising need to use it to help reduce stress and anxiety. And in a lot of recent studies, it’s proven to be helpful to use with children as well! Due to the increased amount of stress placed on children in school and extra curricular activities, children are more stressed now than ever. Then, adding a decrease in social interaction because of increased screen time (both at home and at school), children also are losing the ability to read other’s emotions, as well as regulating their own emotions. 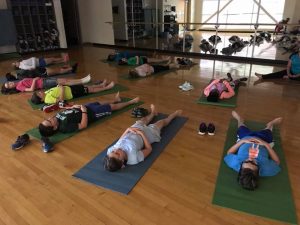 When you take simple yoga poses and deliver them to children in terms they can understand, the results can be quite astounding. Most of us realize the physical benefits such as flexibility, strength, coordination and body awareness. But, there are also a wealth of mental benefits that can be seen from using yoga poses and breathing, or mindfulness, into a child’s daily routine.

One of Yoga Journal’s articles states, “When yogis developed the asanas many thousands of years ago, they still lived close to the natural world and used animals and plants for inspiration—the sting of a scorpion, the grace of a swan, the grounded stature of a tree. When children imitate the movements and sounds of nature, they have a chance to get inside another being and imagine taking on its qualities. When they assume the pose of the lion for example, they experience not only the power and behavior of the lion, but also their own sense of power: when to be aggressive, when to retreat. The physical movements introduce kids to yoga’s true meaning: union, expression, and honor for oneself and one’s part in the delicate web of life.”

This past Summer we decided to put this to the test. We asked one of our yoga instructors, Vickie Culbertson, to lead our Summer Day Camp through 30 minute yoga and mindfulness classes. Each class had a theme, such as kindness. These themes were talked about throughout class and poses were used to describe that theme. Children also learned how to breathe properly so that they could use breathing as a form of combating moments of anger or anxiety. The results across the board were more awareness of emotions, as well as an openness to these campers talking about the themes with other campers, counselors, and even their families. 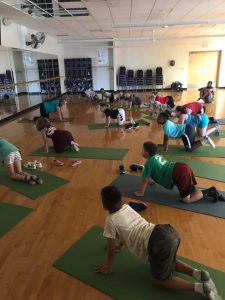 Because we had such great success over the summer, we wanted to try it out again in a different setting. Vickie will now be at the Peoria Playhouse Children’s Museum on Mondays through the first part of November to teach children about 6 different concepts, yoga poses, and small crafts or games.

Interested in checking this out? Here are the details:

Join Vickie from the RiverPlex and explore mindfulness through yoga, play, stories, and games. Everything in these classes can be easily adapted to enjoy at home, too! These classes will take place on Mondays from 10-10:30am at the Peoria Playhouse Children’s Museum. It’s $2.50 per child with admission or for members. This class is for all age groups, however, ages 3-10 will be most appropriate. 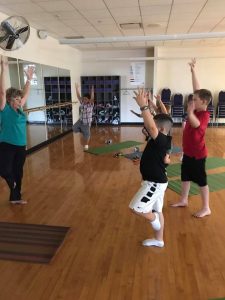