Karen, an avid distance runner, a longtime participant in RPM, SPRINT, and Body Pump, and long time member of the RiverPlex found out in February of 2015 that she had breast cancer. 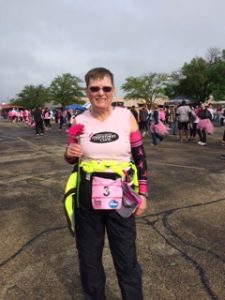 “Every year I have a mammogram. I’ve been doing that since I was in my thirties. In 2015 I went in for my annual mammogram and I received a call back, which wasn’t unusual because I have dense breast tissue.” Having dense tissue makes it difficult to have accurate scans taken. In the call back, the doctors said that they wanted to do a sonogram and a biopsy.” After the biopsy, I had MRIs taken. So then, the doctors found out that Karen had cancer in one of her ducts. The doctors proceeded to schedule surgery (a lumpectomy) for the end of April. “I remember I was in Washington at the Ice Cream Shack, and there was a lady in line in front of me. We began to chat about various things… come to find out that she was a Stage 4 cancer survivor. I think she still to this point is battling brain fog from treatment, but she told me in not too many words that if the doctors were letting me wait that many months to have the surgery not to freak out. So that was great.” Karen found out that she had Stage 0 Stage 1 breast cancer. Karen says she remembers feeling lucky that she had no chemotherapy or radiation, “which was fabulous!” “I have a lot of family and friends in my life that are very faith oriented. I had a lot of prayers for me and that was so helpful.”

Post surgery, Karen visited an oncologist who told her that she would need to be put on a medication for five years. (She has been taking this medication for three years now.) This medication is known to help treat breast cancer. It was because they caught the cancer at stage 0 that Karen did not need the chemotherapy and radiation. “I tried not to do anything differently, but you know “the big C word (cancer) is scary.” “This type of cancer is not something that I would have ever felt myself. I know they always say do your own self breast exams, but sometimes that’s not enough.” Because Karen has dense breast tissue, the doctors decided to use 3D mammography. The fact that the cancer was in Karen’s ducts, the doctors told her that they never would have found this with a regular mammogram.

I asked Karen if hearing this news, that you have breast cancer, in February caused her to change the way that she was living life. Her response: “Uhm, no. U of I has this half marathon every year in April that I run. I had signed up for the race prior to finding out that I had breast cancer. Well, Friday night they had the 5K. This just happened to be the Friday night just before my scheduled lumpectomy (a surgical operation that removes a lump in the breast, typically when cancer is present but has not spread). I ran that 5K.” The doctors had told Karen back in February to just keep doing everything that you normally do – to keep exercising. “The doctors told me that exercising is one of the best ways to combat against cancer.”

Karen’s recovery from her lumpectomy was about two weeks. “I remember walking the Race for Cure. I wasn’t about to run it, but I did walk it and waited a few more weeks to become more active again.”

What advice would Karen give to someone going through what she did? “Have a very positive attitude, and eat healthy, and workout, and try not to be fearful. But to always just keep thinking positively. Make sure you get your annual!!! Be proactive about your health. “It wasn’t until my aunt had a mastectomy for breast cancer (in her 30s) when I started to get mammograms.” This was somewhat of a wake up call for Karen… she was very aware that this could run in the family and she wanted to start being proactive.

After becoming a survivor of breast cancer, Karen did go through genetic testing because of the fact that she has a daughter and a granddaughter. “I wanted to make sure that I wasn’t positive for BRCA 1 or BRCA 2. (Basically, these are the genetic risks for breast cancer. These two genes are suppressors for tumors.) I did not test out positive for that which was wonderful.”

A few months after the genetic testing, Karen said to her mother “have you had a mammogram in a while?” Karen’s mom is in her 80s and she had not recently had a mammogram, “so we had to get her to have a mammogram and it turns out that she also had breast cancer. And she also had a lumpectomy. At her age, they didn’t give her the same medication that they did for me. We both have had to go and have mammograms every 6 months, but now, at this time, we are up to every 1 year.” Karen still goes in her annual breast surgeon check up and her once a year oncologist check up. “They  keep following up on you for at least 5 years.” 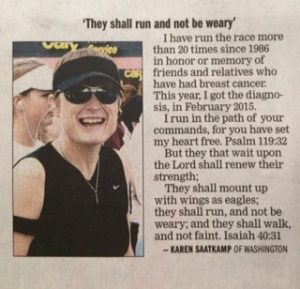 “I would recommend that everyone gets mammograms. I know that some people are afraid to go get one because they are afraid that they could actually find breast cancer. But it is better to find it early, so if you go every year and have a mammogram and you do have cancer… and you have it like I did… they might find it before you would ever have even felt it. You don’t want to wait until you can feel it to go get things checked. Be proactive about your life!”

For more information on our private, small group, and semi private options go here! To experience all of our training options, ask the front desk about a 30 day experience!