Hi! My name is Anna and I am a group fitness instructor here at the RiverPlex. I’ve been teaching here since 2007 and currently teach RPM, SPRINT and Body Pump. In 2013 I was diagnosed with cervical cancer and in light of that, I wanted to share my story. It’s my hope that by sharing, I can save another person’s life. 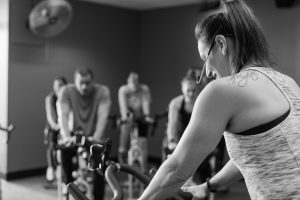 Cancer of the cervix is the 12th most common cancer in females in the United States and is a disease in which cancer (malignant) cells are found in the tissues of the cervix. Usually it grows very slowly over a long period of time. The tissues of the cervix go through changes, where cells that are not normal begin to appear; this precancerous change is known as dysplasia and is usually found during routine pap spears. Squamous cells in the most common form of cervical cancer, it is the cells that cover our body including the cervix, and this makes up about 85% of the cases. Adenocarcinoma (glad cancer) is the other major type and makes up about 15% of the cases, this is the type that I had and here is my story:

February 13, 2013: Was the date that I went to see my doctor for my annual exam and it was business as usual. Approximately two weeks later my doctors nurse called to tell me that the pap smear had come back abnormal so they would need to do a colposcopy, sonogram and an endocervical curettage.

March 5, 2013: I was back at the doctors office for my 2nd exam. I’ve had a colposcopy done before and it’s always come back normal, so there was no need for me to be worried. I’d have the results in a week or two.

March 12, 2013: I got the results and again this test came back abnormal and the first time I heard the “C” word. I would have to come back again for another procedure called a LEEP.

March 19, 2013: I had my LEEP done this day. When the doctor came in he said that the concern here was that the results were showing that the abnormalities were not just on the surface of my cervix but they were going inside of it, this is also the first time he mentioned I may need a hysterectomy. A LEEP is where the doctor uses an electric wire loop to slice off a thin, piece of cervical tissue. In 90-95% of cases this is a cure to the abnormal cells on the cervix. Based on the results of the last exam doctor wanted to take two passes off of my cervix in hopes of getting all of the abnormal tissue. When I saw the doctor at this appointment I knew that it was going to come back as cancer, I kept that to myself because I know everyone would tell me I was paranoid.

April 3, 2013: Doctor called me; all I remember was “you have mild invasive cancer of the cervix”. Doctor told me at this point he had to pass me along to a specialist, a gynecological oncologist, and that treatment would more than likely be a hysterectomy as this type of cancer is treated through surgery. The doctor may do radiation but it was unlikely and would depend upon the staging of my cancer.

Monday April 15, 2013: This was day I was meeting my new doctor at the Illinois Cancer Care center in Peoria. I knew I didn’t need to worry based on all the reading I had done but here are I am, walking into a “cancer center”. I was frightened walking in but walking out I had no fear at all, my doctor explained cervical cancer, the kind that I have, how invasive it was and after examining me he also staged it at Stage 1b1 which means it’s a cancer confined to the cervix that is less than 4cm (1.6 inches) or less in size.

May 13th, 2013: This is my hysterectomy date, I underwent a radical hysterectomy and Lymphadenectomy. The plan was to remove everything but the ovaries and 8 lymph-nodes. Everything went very textbook, no complications, they only removed 4 lymph-nodes because they were so tiny they couldn’t find them (that was a very positive sign) and the cancer was completely confided to just the cervix. 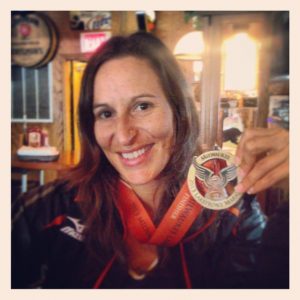 Five years later: I’ve spend the past five years getting pap exams every six months and this past May I had my last 6 month follow and and am officially  in the remission and free and clear stage. I go back to being a normal woman and doing the cervical cancer screening every 12 months. I am always very open and honest with my story, I believe there is not enough education on Cervical Cancer and there are far to few women who are getting their annual exams. I figure if sharing my experience will help one person, then I consider it worth it. I know there is also much heated debate on the HPV vaccination so I also encourage all parents to please do your research from credible sources, have in-depth discussions with your doctors on it and weigh the options for your children, both girls and boys. I am so lucky I knew very early on that I didn’t want children, I’m glad this happened to me over someone else who did because I couldn’t even imagine the heart break it would bring them losing the ability to have kids. The past five years have gone by incredibly fast and I still feel so grateful on how lucky I was. I have never let anything in life hold me back, in fact…just five months after having my hysterectomy, I ran a full marathon, I had registered for it prior to my diagnosis. I was told I was really pushing it and running it, but I was never told not to, so I did it. And can I add that ran it only seconds slower, like 5 seconds, than my first marathon? I’ll call that a comeback.