Ingrid Ruschienski, longtime member of the RiverPlex, born in November of 1943 first got into fitness in 1972. “I’ve always been into fitness, not like this though (small group and semi private training options here at the RiverPlex), since 1972 at the YMCA. We were part of the first aerobics class. We even ended up doing an aerobics performance up in Chicago. Oh, and I was also in a jump rope routine.” It’s clear that Ingrid has seen a variety of different fitness trends over the years. In 2017,  Ingrid began training with us here at the RiverPlex, and since the beginning of 2018 she has been training 4 days a week intensely in our small group and semi private training options. She also attends Sprint and RPM.

I asked Ingrid if she had ever stopped exercising, her response: “You know, more in the summer time we would quit. But I would always go down to this one gym alone and do the weights. Weights always interested me.” Why weights? “I just always liked muscle and wanted to gain muscle.” Ingrid has been training with us for quite some time now, and to be completely transparent she has done everything right! She is here every morning consistently, she takes her time with form, she asks questions, she focuses on her breathing during movements, etc. I asked her what she loves the most about fitness and her response was that she loves kettlebell classes. “I was in great shape during my kettlebell classes.” Kettle bells are commonly used for higher intensity training. You can basically train full body with just one kettlebell! 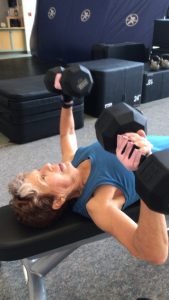 You may be wondering how Ingrid has stayed motivated over the years, her response was, “I have a friend who we made a promise that we would keep doing the same (training) routine until we turned 80. And then we would reevaluate and then it would become 85 and so on. You gotta have somebody to keep you accountable.”  Just a few weeks ago in semi private training, Ingrid hit an 18 inch box jump and deadlifts more than her own body weight (yes she is 75 and still doing this!). That’s huge! Ingrid would tell you that she only hit this a few times, but that’s still a lot more than what others her age are capable of doing. Not only is Ingrid strength training, keeping up with her cardio, and keeping her friends accountable, but she is still making short term, attainable goals that help her stay focused during training. Sometime in the middle of 2018 Ingrid climbed mountains in Germany. She was able to keep a good pace and keep up with (and even pass) those that were much younger than her on the trail. Ingrid exercises daily, is at the gym 4-5 days a week, trains with a purpose, and balances true strength training and cardio.

A few years back, Ingrid went on a four day long retreat in Massachusetts. This retreat was health education, it was yoga, it was nutrition education. Basically it was a learning center. During this retreat is where Ingrid found her love for yoga and balance. As I mentioned previously, I truly believe that this is why Ingrid is so great at all of her other training. She knows how to properly breathe through movements and how to take her time to get the most out of her training.

We asked Ingrid, “Age is just a number, but what about the other people your age that would say I can’t do that or I shouldn’t use weights or train like that… what are your thoughts on that?” She responded with, “You can try and try to get people into it but at the end of the day they have to make this (training and health) a priority. Their priorities aren’t there, I don’t think this stems from fear (of training). I have friends that just don’t put this (health and training) first. They do everything else and then try to fit this in. I fit this in first. This is my priority and if my house doesn’t get cleaned, oh well!!” This is the giant secret to success that no one seems to understand. If your health is not a priority, you are not going to make time to exercise or to eat better.  “My blood pressure never got too high, but I was on blood pressure medication and now I am off of it.” Ingrid no longer has to take a medication every day to help control her blood pressure.

Another secret of Ingrid’s that she let us in on, “I eat a LOT of veggies.” Because she trains hard she kept telling me how much she eats and how hungry she gets. But she is conscious of what she is fueling her body with. Her health is her priority. That’s it, that’s the big secret to living a healthy lifestyle. The next time that you try to say I don’t have time to work out or I am going to get home too late to make dinner at home, try replacing your excuse with “I can’t do this today because this is not a priority.” I guarantee that your mindset will start to change if you start to think about your health as a priority instead of a task!

Lastly, I asked Ingrid if she had any words of advice for others. “Make a commitment if that’s what you want to do. Make it a priority. For marriage and for training that’s my advice.”